Want to live off-grid? You will after seeing these homes

Indulge in some armchair escapism with these stunning off-grid homes from around the world. Going it alone can set your architectural inspiration free.

It can't be just me that finds the idea of living off-grid incredibly romantic and the idea of sticking two fingers up to the consumerist hamster wheel satisfying, when it comes to home-making. If you're an armchair off-gridder like me (for now), you'll love Off The Grid: Houses for Escape by Dominic Bradbury (Thames & Hudson). It features 40 of the world's most incredible off-grid homes, that shows what can be done when you work with - not against- your surroundings, from harsh rock to lush forests.

Take a look at these six beautiful off grid homes and get inspired for turning your self sufficient dreams into reality (which I know takes a lot more work).

Scroll down to the end to find an exclusive discount for pebble readers.

Swedish architect Buster Delin, not only designed this fabulous summerhouse but also built it himself out of recycled and upcycled materials, over seven years. The slow build allowed the essence of area to seep into the design, this off grid house is on the shores of a lake, three hours from Stockholm.

An open plan glass pavilion, heated by a wood stove, allows the lush beauty to shine through. A compost loo, on site water and the Swedish summer's abundance of light make this summerhouse truly sustainable.

Rethink what you know about organic farming. The Granja Experimental Alnardo in Castilla y Leon in Spain is a modern farmstead that's surrounded by a biodynamic vineyard. An organic dairy herd create compost for the vines and the off grid, flexible space of a modern home its in the middle around a courtyard and a central pool which cools the house. It's fuelled by a biomass boiler, harvests rainwater and uses solar energy.

A remote base for fishermen off the coast of Newfoundland is now home to an off grid artists' colony, with six studios designed by Todd Saunders. Each sits in sympathy with the wild scenery, self-sufficient and suitable for inspiration to hit.

Bridge Studio sits raised up so as not to disturb precious lichens and floats in the middle of the landscape. It's big enough for one person to work and sleep, powered by solar energy and a wood burner. 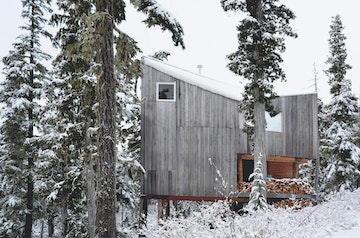 An off grid timber cabin on Vancouver Island seems pretty perfect to me. Architect couple David and Susan Scott, built it out of Douglas Fir, getting friends to help over the years and retreat there to escape over over-connected world. There's no electricity, light comes from candelabras, heat from wood collected nearby and with serious snow each winter, the weather dictates everything.

"Our daughters have known the cabin all of their lives and its great to have a place to share with them where there's no phone coverage and where the basic aspects of habitation - collecting water, creating light and heat - are a daily part of our lives, " they say.

This pre-fab wooden home makes the best of the amazing views in this corner of Dorset, where being on the grid isn't practical. Water comes from a nearby lake and is treated with Biorock and returned to the land. A wood burning stove and photovoltaic panels provide heat and electricity, meaning the owners can sit back, on the deck and take in the beauty of the lake. Rugged farmland on New Zealand's North Island is the destination for a duo of grid cabins by Cheshire Architects. The stark geometric cabins are made of charred cabins, with solar panels and rainwater harvesting. An outdoor shower and compost loo means this is one step up from camping but the homes have more in common with beach houses where the beauty comes from looking out.

Get 20% OFF Off The Grid with the code 'pebble20' (not including P&P) before the end of May at Thames & Hudson.

5 minute guide to building your own tiny home 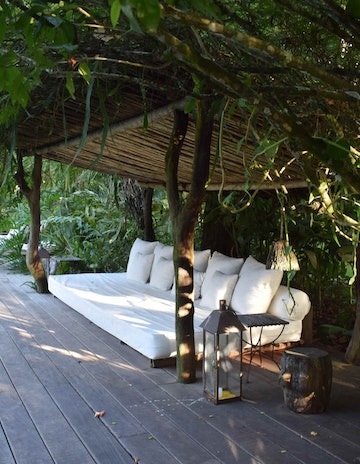 UXUA: The Brazilian Paradise That Commercialism And Cynicism Forgot