Pint of the good stuff: How this vegan beer is brewed using its environment

When it comes to brewing filtered, crisp vegan friendly beer, Freedom Brewery is all about the location, location, location. We head to Staffordshire for a brewery tour to learn about what makes them a conscious choice for a cooling pint.

This article is sponsored by Freedom Brewery

Discover Freedom Brewery's crisp English lager and smooth pale ale. Born in the city and brewed in the countryside.

How much do you think about where - and how - your favourite beer is brewed?

As one of the most sustainable beers brewed in England, Freedom have flown under the radar for years, but no more.

Vegan and organic beer, brewed with a conscience is their ethos, so when I was invited for a behind the scenes peak around Freedom Brewery tour in Staffordshire - and sample some beer on a hot summer day - I couldn’t say no.

House martins swoop from the eaves and bees buzz in the wildflower meadows that slope gently away from this working farm. The brewery is set on 2,000 acres of rural farmland.

This quiet hill in the middle of the Staffordshire countryside, doesn’t look like a traditional brewery, but then Freedom do everything a little differently.

One key difference that this sustainably brewed beer has is its spring water well. The Freedom brewing story really starts and ends with how these guys treat and respect their water.

Housed humbly in a brick shed, most people would overlook it but this 64 metre well provides Freedom with a unique source of spring water and when your brewing process really only focuses on a few key real ingredients - great water is key.

Freedom’s brewing process is essentially the journey of this water from well, into the brewery, being used to create a slow, cold fermented beer that has nothing added to it, and then returning to the earth via a series of water terraces and reed beds that naturally clean it as it cascades slowly down the hill.

Head brewer Jonathan Smith is keen to show me Freedom’s unique waste water filtration system. It’s possibly the prettiest waste system that exists as we amble down a track through a field, past bee hives that the brewery has established and down to a wetland area uses willow and reed beds to enable the anaerobic digestion to break down the brewery’s water waste.

In this way, the brewery returns the water to the local environment, without damaging the stunning setting they sit on. The willows themselves attract wildlife and dozens of birds have been spotted by one of the more keen ornithologists on the team.

A bright green fountain sits gurgling in the sunshine, surrounded by a thriving wetland. It’s bright green because the water is full of algae which eat the nutrients and clean the water, rather than anything untoward. Aside from the pungent smell, it’s an idyllic spot that feels a world away from commercial beer brewing.

That step away from the commercialisation of beer was why Freedom upped sticks from London where it was founded and relocated to quite honestly the middle of nowhere, in the middle of the UK.

Freedom’s brewery is a 20 minute drive from a tiny train station in the Midlands; for the last few miles of that journey, I crept along a one track road, under a cloudless blue sky, hemmed in by thick hedges and had to reverse for seriously large tractors a couple of times. There’s no picking up a latte or a plastic covered lunch on the way to work here.

While Freedom has been around for a while (it will be 25 years old next year, keep an eye out for the celebrations in 2020), the brewery has returned to its roots, offering four ‘sessionable’ options: Freedom British lager, Freedom Helles, a Freedom pale ale and a Freedom Pils.

Sessionable might just be my favourite word this summer. It means that Freedom’s vegan friendly beer is easily drunk, it’s got a relatively low percentage and it is crisp and flavoursome without being pretentious. You don’t need to mutter craft beer buzz words under your breath before you're allowed to drink it. Image From willow filtration systems to high tech stills and cardboard packaging, Freedom Brewery tries to be as sustainable as possible

There’s a real value here put on consistency - so whether you’ve ordered some online or roll up to an ethical event (like this one) and get given a bottle, it’ll be the same ‘sessionable’ taste.

“We do lots of small tasks really well and never vary them which means we always get great beer,” says Smith proudly.

Freedom is naturally carbonated which means nothing is added - making it a great vegan beer option - and the process is different to mass market lagers. Isinglass is often added to other beers, which is derived from fish swim bladders, to create a clear drink but Freedom filter theirs instead.

After the yeast is added, the beer is left to ferment under pressure, releasing natural CO2 back into the liquid, which results in smaller, softer bubbles. It’s then left to mature for four weeks or a minimum of 28 days (a step many brewers skip nowadays) to allow the beer to ‘lager’ (in the traditional German meaning of the word ‘to store’), delivering soft rounded layers of flavour. It’s then sterile filtered (rather than heat pasteurised) to create the crisp, clear, complex layers of lager taste.

It’s craft beer level craftsmanship but to create something inclusive and consistent rather than something small batch and serious.

It might be all rural and bucolic outside, but inside this compact eco-friendly brewery beats the heart of a chemist.

High tech kit keeps the processes, temperatures and recipes exactly the same for every batch, which takes between six and eight weeks to brew.

What I like is there’s passion for every tiny detail, to make the most refreshing clean, crisp lager they can, and that’s the goal. It’s not about weird and wacky tastes, pushing the boundary of bizarre tastes, it’s about solid English lager and beer that anyone can enjoy.

Freedom’s beer is constantly tasted and checked at every stage of its brew and ferment, with serious investment going into many stages of the brewing process.

The brewery has been  thermal fluid heating to cut down on energy wasted, a new steam boiler uses 32% less energy for instance and the brand’s investigating whether glass or cans are the most sustainable single drink options. Even the branding has evolved to use less colours on the labels and cardboard packaging so they can be more easily recycled.

As I tour the brewery, bottles that are being labelled clank through a conveyor belt to be filled, capped and labelled before being sent out across the UK. It’s a hypnotic part of the process and one that brings home how compact and traceable everything is here.

The stacked hessian bags of hops and malt proudly display where they’ve come from, Freedom spend a lot of time with their suppliers to ensure a consistent supply of the best grains - some from within the UK, and others from Europe, ordering their supplies up to a year ahead to secure their ingredients.

On this small hill, around 70,000 pints of eco-friendly beer are brewed each week, each identically made from the core ingredients, with love and dedication. I can’t think of anything more you’d want from a cold bottle of beer on a warm day.

Try it for yourself! Freedom Brewery will be running a bar at pebble pops up at St James Market - a free, pop up sustainable living market in central London - on Sunday 8 September, from 12pm-6pm.

This article is sponsored by Freedom Brewery

Discover Freedom Brewery's crisp English lager and smooth pale ale. Born in the city and brewed in the countryside. 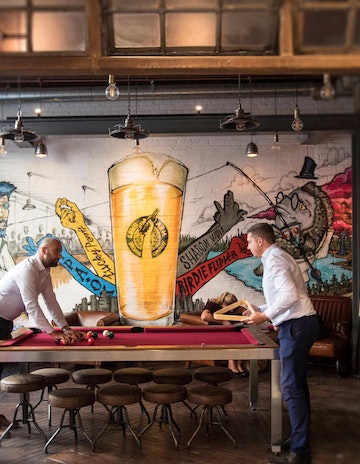 Glass half full: a third of us don’t know glass can be recycled