Bottle it: 5 things I learned from River Cottage about preserving

Really we’ll take any excuse to head down to River Cottage, but there’s something soothing about learning about preserving. It’s slowing down time in action, both in terms of capturing the flavours of the seasons but also in the art of preserving - and taking part in an annual culinary ritual dating back thousands of years. It’s a moment to simultaneously be at one with nature and bend it to your will for another day. Hayley Coristine tied her apron strings, rolled up her sleeves and got to work learning from the best in the bottling business.

Preserving is all about finding ways to hold on to the best of what the seasons throw at you for the times when food is less plentiful. Braving a chilly late winter morning, I headed down to River Cottage for its Winter Preserves course with chef Rachel de Thample to learn more about the art of turning fresh, seasonal produce into sweet and savoury treats that can be enjoyed year round.

While the word ‘preserves’ might make you think of jams and marmalades, preserving actually includes a whole harvest of sweet and savoury things. Sweet preserves include jams and jellies, of course, but also curds, honey ferments, cordials and alcoholic infusions. Think: elderflower cordial, sloe gin and limoncello. Savoury preserves include salty citrus, vinegary pickles, juicy chutneys and gut-friendly ferments like sauerkraut or kimchi. Each technique is different, but the purpose is the same: to hold onto what nature gives you now, for later.

It has a seriously old history

Preserving has a beautifully deep history. For millennia, fermentation was one of the most common ways of preserving food before the invention of cans and refrigeration. This procedure of delicious decay involved placing your food of choice (anything from fruit and veg to fish and meat) into leaf-lined earth pits. The cool pits provided the perfect conditions to produce natural lactic acid required to keep food edible for months or even years.

In the first century AD, the Greeks experimented with fermenting whole quinces in honey and rosewater, then enjoyed the wine-like liquid. Not to be outdone, the Romans cooked shreds of quince in honey, balancing out the sweetness with white pepper.

These early marmalade recipes called for rosewater and grape must to flavour to the sweet treats. Anecdotes suggest Britain was first introduced to modern day marmalade in the 18th century after a Spanish shipwreck in Dundee. The cargo of Seville oranges onboard were too bitter to eat, but an entrepreneurial local boiled the peel up with sugar, creating the first Dundee marmalade.

You can preserve almost anything

Preserves are as versatile as the fruit and veg you chuck in them and a basic understanding of the principles will give you license to experiment and come up with your own creations.

For savoury preserves the key is salt, a natural preservative, which helps keep things good far longer than their usual shelf life. Adding just a few grams to water (equivalent to a 4% briny solution) is enough to keep bad microbes from taking hold, and as long as your chopped fruit or veg is covered in water and the jar is kept airtight, it will keep for years.

We try a selection of Rachel’s preserves, including honeyed marrow and ginger marmalade with fennel blossom, rhubarb and blood orange marmalade with rosewater, and a variety of of salt preserves from blood orange to zesty lime and sour kumquat. All are unlikely and delicious. When life gives you clementines, make clemencello.

Whip up delicious homemade ice cream by mixing lemon curd into Greek yogurt before it goes into the freezer. Salt preserves are savoury flavour bombs that can be deployed as an alternative to stock cubes - try a preserved lime in place of an olive for a dirty martini.

And with the shift of a few subtle ingredients, you can transport a preserve from one geographic location to another: add rosemary and thyme and your preserved lemons will be flying to the south of France; add oregano, mint and bay and they’re sailing off to the Greek islands.

Preserving is an effortless way to cut down on food waste. Whether it’s using up surplus from the garden or working with the forgotten bit of lime or lemon currently drying up on the bottom shelf of your fridge, you’ll find a second life for anything otherwise destined for the compost bin.

Alongside pantry staples (sugar, salt, and vinegar), the ingredients for your next preserve are probably already knocking around your fridge or fruit bowl. Leafy brassicas like kale, cavelo nero, brussels sprouts or cabbage can be painlessly turned into a sauerkraut-like ferment; root veg like beetroot, carrots and turnips are perfect candidates for a vinegary pickle; citrus is a cinch for a salty preserve.

While we may not exactly be struggling to get our vitamin C hit these days thanks to on-demand, year-round oranges and blueberries, preserving is accessible, satisfying and good fun; a ritual with deep roots.

Hayley Coristine was a guest of River Cottage. The course includes lunch, tons of taste tests and get introduced to the principles of various preserving techniques.

pebble readers can get £20 off the next Preserves course at River Cottage HQ on 8 September 2018. Click here and enter PEBBLE when you book. This offer cannot be used in conjunction with another promotion. Valid until 30 April 2018.

6 reasons why you should be a seashore forager 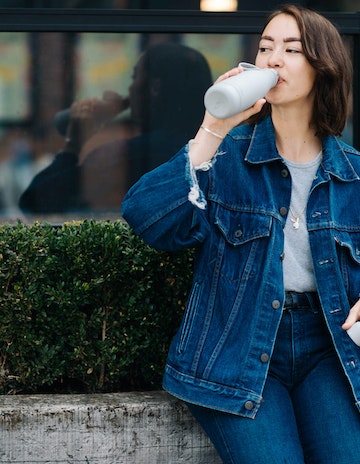