Just How Bad Is Plastic For The Environment? Your Explainer Guide

We may not directly put plastic into the ocean, but 91% of plastic used ends up in landfills and our seas.

Read about what we can do to stop it.

Everyone knows that plastic is bad for the environment, but do you know all the different ways that plastic affects ecosystems and ourselves?

It is estimated that over five trillion pieces of plastic are in the ocean - but how does it get there?

Learn about how and why plastic is bad for the planet, and discover what we can do to help.

Plastic facts you need to know

Plastic is currently mass produced all over the world, from the carrier bags that are used in supermarkets to the plastic covering the fresh produce, it seems that plastic is everywhere.

Plastic is continually produced within the dominant systems we have in place: a linear mode of consumption.

The world’s production of plastic increased from two million tonnes in 1950 to 380 million tons in 2018.

Yet, it is hardly recycled.

It is estimated that only less than 10% of the plastic produced in the UK is recycled, and the rest of the world is not much different either as only 9% of waste plastic is recycled and 12% incinerated.

So, with only 9% being reused, where does the rest of the plastic go?

Currently 79% of plastic ends up in the landfill. If the rate of plastic production and waste continues, there will be 12 billion tonnes of plastic in landfills and the environment.

Why is plastic harmful?

Plastic pollution happens in a variety of ways:

All of the forms of pollution either immediately or slowly poison the environment and the world that we live in.

The rest of the article will now go into detail about how plastic is created, what it is used for, how it breaks down and what is being done to help.

How is plastic made?

The damage to the environment doesn’t start when plastic is wasted, but in fact at its very creation.

Plastic is made from fossil fuels, and the production of plastic pollutes waterways with the tiny pellets produced by these facilities making its way to water. These pellets are then consumed by animal life.

Moreover, chemicals from production also contaminate waterways, which can be toxic and poison entire food chains.

In fact, 90% of seabirds have plastic in their bodies which is no surprise when plastics consistently make up 80% of all marine debris according to a study.

Likewise, the air pollution made from the petrochemical facilities continues to contaminate the surrounding air, creating a variety of health problems in neighbouring communities.

This includes asthma, lung cancer, organ damage (including brain damage) and cardiovascular diseases, amongst others.

Finally, the use of fossil fuels in the first place, alongside the processes of production, end up contributing to climate change.

What is plastic used for?

There are a multitude of ways in which plastic is used - the majority of it is used for single-use.

One of the issues with single-use is that, well, it’s only to be used once and then thrown away. This means that there is an enormous amount of waste created from just one product.

In fact, around half of the global annual plastic produced is destined for a single-use product.

See the amount of plastic bags that have been created for single-use this year, so far.

Bear in mind that every plastic bag is used for only 12 minutes on average. That means that plastic pollutes our environment for thousands of years to serve us for 12 minutes.

What a lot of people do not know is that not all plastic is the same.

What do different grades of plastic mean?

There are different grades of plastic which are indicated on the packaging:

Many seemingly harmless plastics can become very toxic once heated, so plastic bottles that are left in the sun, for example, release dioxin. That being said, it is best to avoid the sixth and seventh grade of plastic at all cost, as these are directly harmful to human health.

How is plastic disposed of?

For the plastic waste that is not recycled, it is either sent to a landfill or incinerated.

The burning of plastic leads to air pollution. In fact, incineration of plastic waste in an open field is a major source of pollution, releasing toxic gases like dioxins and mercury into the atmosphere.

91% of plastic ends up in landfills or the ocean.

Although it is argued that the burning of plastic could be a better alternative to burning fossil fuels, and that burying the plastic wastes its calorific value.

Regardless, air pollution particles are already known to enter the body and cause millions of early deaths a year.

And, environmentally speaking, it is better for plastic to be buried or put into a landfill than burnt - although the best case is recycling.

However, only 9% of plastic created is recycled - leaving 91% of plastic to be discarded and never used again.

How does plastic break down?

Plastic breaks down into millions of tiny plastic particles, and never truly disappears. These are known as microplastics.

Microplastics are harmful in that they can no longer be completely removed from the natural world, and continue to exist in the lifeforms. [link to microplastics]

Animals, including humans, ingest them and smaller plastics, called nanoplastics, can even spread throughout the body.

It was discovered in 2022 that plastics have been found in the human bloodstream for the first time, meaning that they can easily spread to organs and other areas of the body.

Moreover, a study found that 93% of Americans test positive for a plastic chemical BPA.

Microplastics are more harmful to babies, with babies that are fed with plastic bottles swallowing millions of microplastic particles a day.

Yet, there is more research to be done. NGOs like Common Seas are asking the UK government to allocate £15m for research, to understand the impact on babies, foetuses and the immune system.

With plastic production set to double by 2040, this research is urgent.

Likewise, our usage of plastic within our single-use culture is unsustainable and impacts the environment and lives negatively.

How does plastic get into the ocean?

Nanoplastics pretty much get everywhere.

In fact, a study conducted this year found that as much as 3,000 tonnes of nanoplastics cover Switzerland every year.

Moreover, microplastics have recently been found embedded deep in Arctic ice and an estimated 51 trillion microplastic particles in the seas.

As stated, some of the ways that plastic gets into the ocean is during the creation, use, and disposal of plastic.

Alarmingly, at least 11 million tonnes of plastic are discarded into our seas every year with the amount expected to triple by 2040 at the current rate.

Currently having a mass twice the size of Texas, plastic is outnumbering fish 6:1 and will soon outweigh all the fish in the sea.

Because of plastic, a million marine animals die every year.

Around 70,000 microplastics are consumed by an average person each year with approximately 100 bits of microplastic in a single meal.

Oceans are important in that they regulate our climate, as well as generate the most oxygen.

So, pollution is also affecting the planet’s ability to produce oxygen and regulate our climate - which of course is incredibly vital in tackling climate change.

What is being done to help reduce plastic in the ocean

Now, plastic’s presence in the ocean, and our overconsumption of the unsustainable product, is seen as one of the most pressing environmental challenges of the twenty-first century.

Stopping plastic at the source

Stopping plastic at the source would ultimately reduce the amount of waste being introduced into the environment, and encourage more of a circular economy of plastic production.

As of 2022, 63 countries have joined the UN Environment Clean Seas Campaign since 2017, having pledged to cut down on their plastic footprint as soon as possible.

There are many, many brands now that have opted for recyclable, recycled, and compostable packaging on their products [sustainable packaging link] as an alternate way to make their positive impact.

There are charities like Kids Against Plastic that fight for stopping plastic, as well as raising awareness about the negative impact that plastic has.

Or, consumers are urging brands, supermarkets, and other big players to stop using plastic through various petitions and campaigns. Changing how we deal with plastic:

Campaigns like The Big Plastic Count encouraged UK citizens to count how much plastic was being sent to the recycling, and see if the amount being recycled added up.

By also campaigning to stop the British government from sending plastic waste abroad, making the government form an infrastructure to deal with waste, it would inherently change perceptions of plastic waste - as it would directly affect local communities.

Moreover, not recycling is actually costing the UK government £78 million a year.

Likewise, by viewing plastic as a reusable material, instead of a single-use throwaway, it could encourage a circular economy.

Join Planet Patrol's Big Bag Ban, in a bid to ban the use of plastic bags in Britain once and for all.

To clean the oceans:

There are an abundance of local and global organisations that are continually cleaning up teh ocean.

For example, the non-profit Ocean Cleanup is developing a method that helps tackle 90% of the floating ocean plastic pollution.

Likewise, in the UK there is the Big Blue Ocean Cleanup who are working towards cleaning coastal areas and oceans in addition to research and conservation.

Ultimately, a lot of the clean up efforts depend on volunteers and donations.

Finally, there are multiple brands who are actively utilising ocean plastic within their products.

What can you do to help ocean plastic?

Another way to help is to support legislation to help curb plastic production and waste. See what local initiatives are being done to clean the waste directly, or what campaigns are happening to help stop plastic at the source.

For example, there are 718 pieces of litter for every 100m of beach in the UK, so participating in beach cleans is a direct way in which to help stop the oceans being polluted.

You can organise or join your own beach clean through Beach Cleans.

An easy way to help prevent plastic waste is to recycle properly as this will increase the plastic’s lifespan, and contacting your local MP to make sure that the plastic is actually recycled.

Educate yourself more about the issues surrounding plastic, and let others know about your findings.

Support charities and organisations that are addressing the issues of plastic pollution.

I Paddleboarded The Hudson River To Log Plastic Pollution 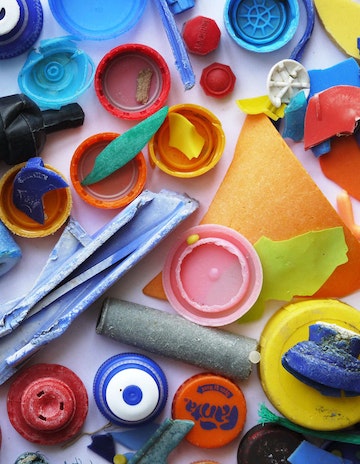 5 Of The Best UK Eco Spas You Need To Visit