The time to change how we deal with our periods is long overdue.

It is no shock that the amount of waste created by single-use products is phenomenal - so why do we see it as the norm for menstrual products, especially as the UK sees 200,000 tonnes of waste a year from just pads and panty liners?

Luckily, there has been a recent rise and popularity in the amount of eco-friendly period products that are available in the market. 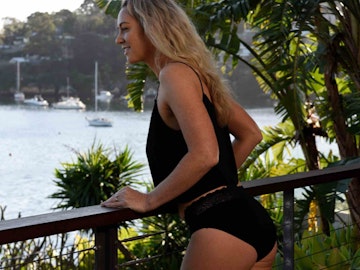 The issues with single-use sanitary products

The majority of period products that are available are single-use and made from a lot of plastic.

On average around 11,000 period products are used in a lifetime, with the UK seeing 4.3 billion items used per year.

Imagine the environmental impact if everyone started using reusable products.

4.3 billion sanitary products are used, and thrown away, in the UK every year

Once thrown away, these products end up in landfills or the ocean - and most stay in the environment for a very long time.

And that’s just for those that are thrown away.

A shocking 1.5 to 2 million menstrual items are flushed down the toilet in the UK, which leads to severe sewage blockages.

Moreover, the Marine Conservation Society revealed that on average, 4.8 pieces of menstrual waste are found per 100 metres of UK beaches.

It is estimated that sanitary pads are made of 90% plastic, with a pack of menstrual pads being the equivalent of four plastic bags.

Although tampons are made of only 6% plastic, the packaging that they often come in is unsustainable and frequently unsterile.

Ultimately, single-use period products are incredibly unsustainable and make a lasting, negative impact on the environment.

Since 2013, global original period and absorbent apparel brand, Modibodi®, has been the UK’s number one leak-proof brand.

Designed with compassion and offering a sustainable solution to disposable products, Modibodi uses proprietary innovation and patented technology to ensure each and every one of their designs is market leading - saving billions of single-use disposable hygiene products from ending up in landfill.

Modibodi products are sustainable and designed to be reused. Their efficient design also means no leakage.

The brand is striving to become a Carbon Negative business by the end of 2023. They have a Preferred Materials Standard whereby they will change their materials to create a lower impact on the environment.

They will be changing to fabrics that consider emissions, water use, chemicals and the health of people - changing 90% of their fabrics to this new standard by the end of 2022.

Modibodi also creates a positive impact beyond encouraging people to use eco-friendly sanitary products with the wide variety of charity work they do.

For example: they have donated 10,000 pairs of period underwear to women who have experienced domestic violence, and also have partnered with The Katalyst Foundation which provides the women of Fiji the opportunity to continue to go to work and school throughout their menstruation.

Finally, Modibodi also allows customers to donate period pants to women and girls around the world suffering from period poverty, as a part of their Give A Pair Contribution.

Why biodegradable period and pee-proof pants are a game changer

The first of its kind in the industry, the biodegradable period pants mean that there is drastically less impact on the planet.

After years of blood, sweat and science, Modibodi has taken steps to end the lifecycle problem of textiles developing a product that not only reduces waste, but doesn’t cause harm to the planet.

It has created leakproof periodwear which are 97% biodegradable (only the elastic isn't).

So, what are they made of that makes them biodegradable?

Over two years of testing, biodegradable period pants are made from a blend of natural and bioengineered synthetic materials:

The gusset of the pants are made from Merino wool, which is naturally highly absorbent and wicks away moisture.

Bamboo is used to absorb fluids, and a biodegradable TPU film acts as the waterproof layer to seal in the fluids.

The polyamide yarn makes up the elastic of the pants, with a lifespan of approximately five years in the landfill (ten times faster than standard synthetic fibres).

But now let’s put them to the test…

The underwear I received was Modibodi’s Biodegradable Bikini with the period and pee-proof rating of Moderate - Heavy.

This absorbency rating means that the underwear is able to hold 2 - 3 tampons worth of liquid.

My underwear arrived in paper packaging that was both recyclable and biodegradable, and had all the things to know about the pants detailed on the back.

Once out of the packaging, I was surprised as to how soft the underwear was, yet also surprised at how thin the material was. This section of the underwear is made from Tencel and Merino Wool.

I was used to period pants feeling a bit like swimwear; I’m sure this is due to the materials used but may also be due to the lower absorbance than I’m used to.

Despite the thin material the underwear has a good stretch to it, although with the stretching the underwear does become more transparent.

I was pleased to see that the thick gusset covered a large area of the underwear highlighting Modibodi's conscious design to prevent leakage.

The gusset was also the complete opposite to the rest of the material, in that it was hardly any stretch to the material. This means that the gusset should withstand many washes, and should not become thinner over time.

The care instructions for the underwear states that the pair requires a rinse under cold running water before being machine washed, which also should be a cold wash.

It also states that they should not be bleached, soaked, tumble dried, ironed, or washed with softener.

On the website, ModiBodi suggests that the periodwear should be washed in a laundry bag to help protect it.

Seems easy enough. Now, how did they fit?

Hesitant at first, I was pleasantly surprised at the fit of the underwear. I was originally sceptical of the thin waistband, which I thought might cause discomfort, but they genuinely fit like a glove.

Likewise, I have previously struggled with my body proportions and underwear fitting me, yet the stretchy material meant my entire rear was covered.

To elaborate, normally the gusset can cause some discomfort, or hyper awareness of its presence, just as a sanitary pad can. The Modibodi pair didn’t create that effect.

However, this could be explained by the fact that I tend to wear period pants with super high absorbency. But here I feel like the gusset fully covers me so I would be surprised if there are any leaks.

The soft material really does make the Modibodi biodegradable period pants a truly comfortable fit. I also really loved the style and felt that they flattered my body nicely.

Overall, the underwear has passed the pre-period test. But how will they fair while I’m menstruating?

Before using the pants it is vital that they are washed before use. This not only ensures a clean pair, but unlocks the absorption of the underwear.

While I was trialling the Modibodi briefs it was important that they were absorbent and comfortable as I was at Roskilde Festival so I was really testing their comfortable and leakproof qualities.

As stated previously, they fit me perfectly, and this did not change whilst I was menstruating. Likewise, the gusset did not become uncomfortable, or even noticeable, whilst I was wearing them throughout the day.

I was wearing the pair on my first day of menstruation, which is one of my heaviest days, and I found that the pair lasted for most of the time that I was out and about, around six hours.

I found that using the underwear made it so much easier to be active while out and about compared to sanitary pads and tampons - which also tend to create discomfort.

The underwear also saved me from using the festival toilets more than I needed to, so that was a relief.

In comparison with other period pants that I have used, I found them only slightly different in appearance. The absorption held up despite the gusset being thinner than what I’m used to, as well as being a softer material.

Overall, I was impressed with the underwear, especially given my original apprehension when assessing the materials. 12 Sustainable Female Founders Who Are Helping To Save The World

Sponsored
Explore all articles in Live