Our Secret Climate Saviour: Why Seagrass Is Vital To Our Planet's Health

Our superweapon for tackling climate change has been waving at us this entire time…say hello to seagrass and find out how we can save it.

The current conditions of UK ocean areas are becoming more and more unhealthy.

Currently, 11 out of 15 indicators of ocean health are being failed by the UK.

The UK is estimated to have lost up to 92% of its seagrass meadow, and along with it 11.5 Mt of carbon and 400 million fish.

What does this have to do with seagrass? Join us on our deep dive and find out more...

Growing in coastal environments, seagrasses are the only flowering plants that are able to live in seawater. This means that they pollinate while being submerged in water.

Seagrasses resemble terrestrial grass - which is how they got their name.

Seagrasses are estimated to have first evolved when dinosaurs still roamed planet earth, over 100 million years ago.

Today, there are over 60 species of seagrass around the world - five of which can be found in the UK. The UK’s seagrasses are:

Unfortunately, nearly 25% of these species are considered in danger. 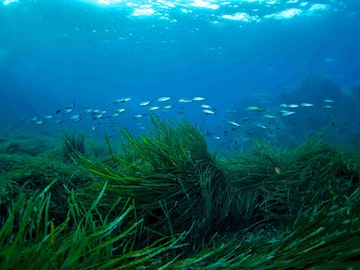 Why is seagrass important in the UK?

Seagrasses have both a local impact on the environment, but also on the entire planetary ecosystems.

They are known to:

Seagrasses provide both feeding grounds and home for the intricate ecosystems that they are a part of - with some fish spending their entire life cycles in seagrass meadows.

As a shelter for creatures hiding from predators, or a safe spawning point for fish, it is evident that seagrasses play a vital role.

In the UK, seagrasses are home for native species of seahorse and they shelter young flatfish.

In fact, seagrasses feed a whole host of small invertebrate mesograzers, in a relatively mutualistic relationship as they keep the seagrass clean and promote growth.

These creatures are then consumed by larger creatures, playing an instrumental role in the coastal food chain.

At low tides, wildfowl and other animals on land feed on the exposed seagrass.

Once dead, the seagrass that gets washed onto the shores becomes a habitat for crabs, providing them essential nutrients.

Consequently, the health of seagrass is an indicator of the biodiversity in our seas.

Rainforests and trees are often seen as the only solution to sequestering carbon from the atmosphere - when there are many other forms of sequestration.

In fact, seagrass sequesters carbon faster than the rainforest, capturing carbon at a rate 35 times faster than tropical rainforests and accounting for 10% of the ocean’s total carbon.

What makes this even more impressive is that seagrass covers less than 0.2% of the ocean floor!

Carbon that is captured in the ocean is described as ‘blue carbon’, as opposed to the ‘green carbon’ of trees.

The amount of carbon stored is calculated as being up to 100 times that stored in terrestrial ecosystems such as rainforests.

It is estimated that in one year, the world’s seagrass meadows can capture 83 million metric tonnes of carbon, with just one acre of seagrass sequestering 740 pounds.

The world’s seagrass meadows can capture 83 million metric tonnes of carbon every year.

How does seagrass capture carbon?

Seagrasses capture carbon from the atmosphere in a similar way to trees. Via photosynthesis, they absorb carbon and use it to build their leaves and shoots.

Once dead, the seagrasses are replaced by new shoots and leaves while the dead material collects on the seafloor .

If left undisturbed, the sediment build-up can store carbon for thousands of years.

How are we losing seagrass?

Seagrass is being lost rapidly. It is predicted that we have globally seen the loss of 30,000km2 of seagrass in the last couple of decades.

The rough rate that the world is losing seagrass is 1.5% per year, meaning we are losing 2 football fields of seagrass each hour.

The main ways that the UK, and the rest of the world, is losing seagrass is from:

The seagrass’s ability to slow down the current means that pollutants accumulate on the seagrass bed.

Likewise, mining and coastal development disturbs the sediment on the sea bed, which blocks out the light that is essential for seagrass to prosper.

Also surface run-off from chemical fertilisers heads into the sea, creating nutrient-rich waters that disturb the balance of these ecosystems negatively.

In fact, it encourages algae to grow on the surface of water, blocking out light for the ecosystems below the surface.

Physical disturbance from dredging can both remove seagrass plants and lower the light levels.

In fact, boat anchors can leave ‘scars’ on seagrass beds fragmenting the habitats. This fragmentation affects animal movement as well as leaving the landscape susceptible to erosion.

Ultimately, the disturbed and destroyed seabeds lead to the release of stored carbon, releasing carbon dioxide back into the atmosphere.

What seagrass conservation is being done?

Conservation and rewilding are incredible ways of reinstating wildlife and encouraging the flourishing of ecosystems.

In fact, when marine protected areas are fully protected biodiversity increases by an average of 21%.

There are multiple charities, companies and brands tackling the crisis of depleting ecosystems.

Mossy Earth is one of the great organisations helping to restore ecosystems from around the world. With mainly land work, Mossy Earth also takes care of what is happening in our oceans.

In partnership with Sea Forester, Mossy Earth is currently committing to a large-scale restoration of seaweed forests.

Specific to seagrass, one of the biggest seagrass restoring organisations is Project Seagrass, solely dedicated to protecting the UK’s seagrasses, and those around the world.

So far, Project Seagrass have planted over a million seagrass seeds, and have created 3,000 new seagrass data points.

Having contributed to over 70 scientific publications, Project Seagrass has been committed to restoring seagrass since 2013.

The WWF has also committed to a project on restoring the UK’s seagrasses, having already worked with 44 separate organisation’s workers knowing that seagrass is crucial in improving water quality, supporting economies and fisheries.

There is no doubt countless more organisations dedicated to restoration and conservation, as well as other brands and companies that support these projects.

How can we help?

Educate yourself: read anything and everything on conservation and rewilding. Check out our Rewilding Booklist for a great first step.

Alternatively, watch some of the Best Conservation Documentaries, or listen to podcasts that aim to educate audiences on these important issues.

Share what you learn: whether this be to people close to you in life, or people in your community, share what you’ve learnt so that others may learn too.

Spring into action by supporting charities and projects that are protecting the environment, like Project Seagrass. Whether it be volunteering directly, donating to them or raising awareness - any degree of help can go a long way.

26 Natural Realms Of The UK: The Writers Shining A Light On The Biodiversity Crisis

Go Wild: The Best Books to Learn About Rewilding

Deep Dive: The Best Documentaries About Conservation You Might Not Have Seen