Meet the oysterman of Skye

The Oyster Shed in Carbost overlooks Loch Harport on the west coast of Skye. Families and couples gather around steaming hot chips and crab legs, oysters shells and mussels, all piled without pomp into takeaway boxes and devoured overlooking the water. A Skye institution, it’s captained by softly spoken oysterman Paul McGlynn.

The Oyster Shed looks like a rural mechanics when I pull up on a grey Wednesday lunchtime. It's half weatherboard, half industrial, with the front entirely open to the elements. There are hand painted menus and locally made biscuits and tablet to take home.

Paul McGlynn is one of down to earth heroes of this diverse and prehistoric island (Scotland’s second biggest). He has worked almost every day for the last six years to rebuild an oyster business decimated in a few days in 2011 by vibrio disease.

“I inherited the oyster farm from my father in law, who started it in 1981. Before we nearly went under, we had over two million oysters and would sell them everywhere,” he explains. “I started The Oyster Shed as a pop up, seasonal place where people could come and have affordable seafood. I used an old burger van and made a new front for it and cooked up the mussels and scallops in there and shucked oysters."

Each year McGlynn has added something to this ramshackle shed. And shed isn’t being romantic – it’s as gloriously rustic as you can imagine.

“I wanted to have communal tables and it’s all BYOB so people can bring up their own bubbly or booze and sit and have a nice meal. There’s no corkage and the prices haven’t changed.”

Oysters here are £1 a pop, as Paul shucks away as he has done every day for years with one knife that he uses all season. There are teas and coffees – but don’t expect an artisanal brew.

McGlynn can shuck between eight and ten oysters a minute

Everything at The Oyster Shed has been upcycled. Paul shows me round a new gift shop that's opening this spring (built for his mother in law so she can still be involved but sit down in the warm) and he points out his old work bench that has been repurposed into a display unit, the shelves are made from cut off bits of wood.

“I like the idea of making do and mending,” he explains.

Paul’s own oyster opening counter, shiny with ice and filled with the flinty circles of oysters, was once a steel sink meant for some other purpose entirely.

Last year he added a covered lean to on the side of the building, which has a beautiful view straight down to the loch. What most people don’t realise is that they’re also looking over his oyster beds.

“We’re not as big as we used to be and that’s fine with me,” he points down the hill to the water. “The beds are just down there and my father in law has a boat that brings in local langoustines, crab and scallops from around the island’s coast. Skye is fantastic for seafood because there’s no pollution – the water’s clear for them to grow.”

Paul’s oysters take three years to grow and he reckons he gets through around 150,000 a year. A few go to local restaurants but he prefers to sell nearly all of them through his own shed to his own customers. The idea of changing or letting his visitors down causes his brow to frown.

It’s this commitment to keeping things local and growing organically, like his oysters below, that has seen this humble shed become one of Skye’s best foodie stops. A few years ago he had to shut each winter and could only employ seasonal staff – now he’s open all year round and employs nine people full time.

But it’s not just holiday makers who flock to Paul’s out of the way shed, chefs do too. He’s been propositioned by a few wanting to do pop ups, like British chef James Martin, but it doesn’t interest him. He’d have to close the shed to the public and he doesn’t like disappointing people.

He’s also turned down bus tours and endless invitations to be a part of larger foodie tours, the location can’t cope with the stream of cars as it is – he has to get people to direct the traffic (employing half the neighbours’ teenagers to help him) during the summer months. The shed is up a one lane hill with little turning room and space for about half a dozen cars in what passes casually for a car park.

He will however start doing his own very small oyster tours over the summer. Four people a day can accompany him down to the oyster farm to see the beauties growing and eating some on the sand. He’d rather spend an hour with a few people each day giving them a proper experience than just having busloads of people on a conveyor belt whizz through.

“I don’t want 20 or 40 people on a tour, I’m not interested in lots of people,” He shakes his head, his beanie hat pulled down almost over his eyes. “This is what we do and that’s enough for me.”

Something tells me that Paul will find another way to grow next year.  Life always finds a way.

Wild Britain: Not Just A Walk In The Woods 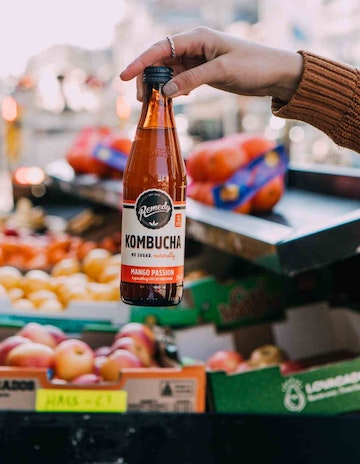