This year might be the last year you find a mini bottle of shampoo made of single use plastic in hotels. Several chains have pledged to get rid of them, but City to Sea campaigner, Steve Hynd, shares here how we can all help speed up this process.

There was a time when no holiday was considered complete without trying to eke out the most miniscule amounts of shampoo from those mini bottles that haunt hotel bathrooms. But the times they are a changing.

This week it was announced that all hotels run by InterContinental Hotels Group (IHG) will remove mini toiletries from their rooms, after realising they get through 200 million mini bottles of shampoo, shower gel and so on - per year.

The move will see their hotel chains such as Holiday Inn and Crowne Plaza hotels taking the small single-use plastic bottles out of their 843,000 rooms by 2021.

These toiletry bottles have been a curious part of a hotel experience for as long as most of us can remember.

Alongside the shower cap, the free hand conditioner that smells like Aunt Marjorie’s potpourri and the trouser press they were an unquestioned part of hotel room ‘experience’.

Premier Inn, the UK’s largest hotel chain, has never used them and instead fitted rooms with dispensers to cut soap waste as well as plastic pollution. It's a move that has saved them money as well as the environment.

Last year Marriott Hotels announced they were scrapping the mini bottles and just a few months ago the first ever piece of legislation was introduced in California that would see these tiny toiletries banned – forever.

But how did hotels ever think these environmentally disastrous and economically costly bottles were ever a good idea?

Why do we need to get rid of mini toiletries?

If there's anything that conjures up single use plastic when you're on holiday, it's hotel toiletries. Mini bottles of shampoo and conditioner might be handy in the moment but they contribute to our overwhelming, global plastic crisis.

The Ellen MacArthur Foundation has worked out there will be more plastic than fish in the sea by 2020. Plastic makes up 60-90% of all marine pollution, with over eight million pieces of plastic ending up in the oceans, every day.

In addition to the millions of mini toiletries that hotels get through, research suggests that 15.5 million Brits buy travel size bottles when going on holiday with many saying they would make no effort to recycle them. This results in an estimate 980 tonnes of plastic bottles being dumped by holiday makers each year. For context, that’s the equivalent to two-and-a-half Boeing 747s.

But there is good news for the summer.

We don’t have to wait for our government to ban these things before we next enjoy a weekend break. There are other ways to enjoy a cranial cleanse that doesn’t involve harming the oceans.

The first is an obvious one. There are shampoo bars out there that come with no plastic packaging at all.

Click here for our suggestions for some of our favourite plastic free toiletries including hard bar shampoos.

But if you are really committed to the squelch of liquid shampoo as it oozes out onto your palm, then there is no reason not to buy refillable bottles.

There is a whole world of travel refillable containers out there waiting for you to decant your shampoo into for your mini break.

To make this easy for customers we need all the big supermarkets to stock these products and give customers a real choice.

The travel sector is changing fast. Some Thomas Cook research found that 90% of its customers care about plastic pollution and want them to do something about it.

In addition, 60% are more likely to use a travel provider who took plastic pollution seriously.

At the same time refill schemes are slowly becoming the norm, so you don't need to keep buying single use plastic to take away.

Waitrose recently became the first of the big supermarkets to introduce a refill station in its store. This allows customers to top up dry goods and beer and wine in reusable containers.

Not near a Waitrose? See our list of over 90 zero waste stores across the UK where you can refill haircare, pick up hard bar shampoos, bamboo toothbrushes and other plastic free travel essentials.

And then there is the pioneering Refill App – that allows you to find the nearest place you can refill your reusable water bottle for free.

Click here for more ideas on how to travel without using single use plastic.

Ask your hotel about their recycling and eco-friendly policies

We all know greenwashing is rife. Don’t believe the myth that recycling will solve everything. Remember that of the more than six billion tonnes of plastic waste produced by 2015, only 9% has ever been recycled. Of the rest, almost all of it is now in the landfill or the natural environment (79%) with the remainder incinerated.

If you happen to find yourself sharing a shower with one of those ridiculous mini bottles of shampoo; firstly, don’t use it and secondly, let management know you don’t want them to use them. It might seem like a small move but in these rapidly changing times hotel chains need just the smallest of nudges to adopt more sustainable approaches.

You can be that nudge.

Steve Hynd is a freelance journalist and the Campaigns Manager for the award-winning plastic pollution campaigning organisation, City to Sea. Read more about the City to Sea #PlasticFreeTravel campaign

Check out these reef-friendly suncream brands

Here's how to pack a more eco-friendly suitcase this summer

Pick up sustainable swimwear for guys and girls

Could you go ‘poo free? Shampoo that is 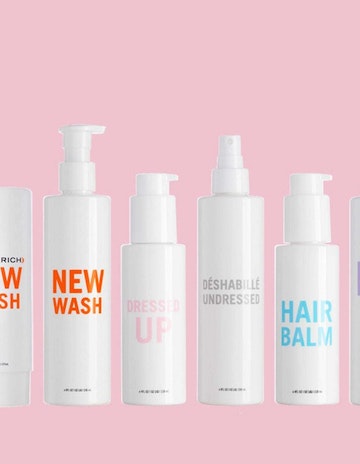 This Shampoo Brand Wants You To Quit Shampoo

Sponsored
Explore all articles in Travel